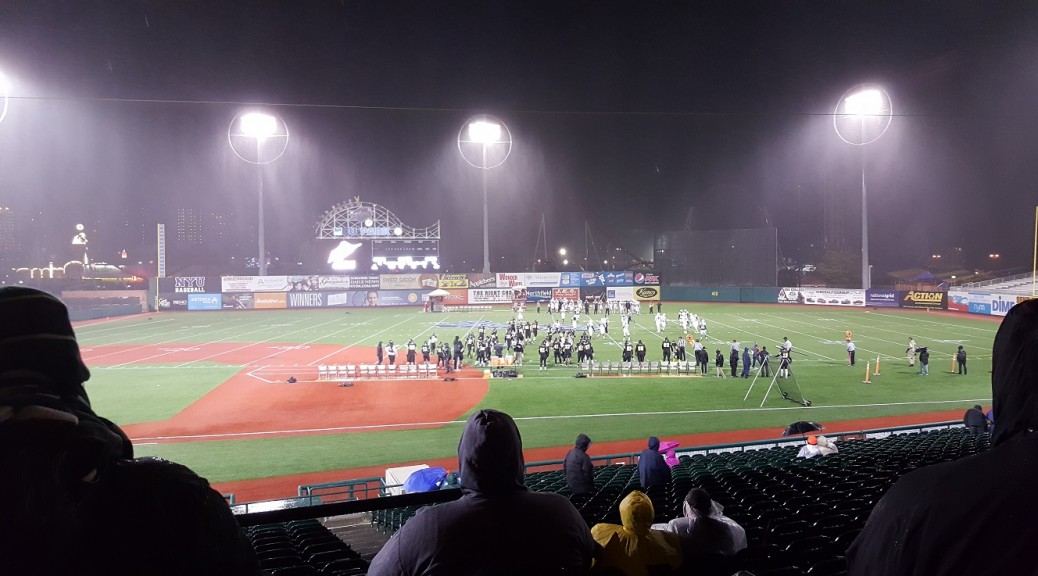 The home opener for the  Brooklyn Bolts (October 2nd)  was a cold, windy and miserable day.  When I say Miserable I really do mean miserable. The rain was non stop the whole day. Wind was going in every direction.  But you know how we do. Left foot right foot your body will follow.  The tickets were bought  weeks ago.

One of my friends was waiting for me at the bar to per game or so I thought. It turned out that he was passed out at home sleeping. He may have been the wiser of the two of us.  I did the only thing that you could do in a bar before a game. I pre gamed like a champ till the idea of going out in the rain for a Bolts football game  did not sound so bad or idiotic . For your reference the count was 5 beers and 3 shots in one hour.  Long story short I get to MCU park where they Brooklyn bolts play via train because there are not cars anywhere in Brooklyn that can be hired. Fuck you rain.

The game well what can I say, they sucked the wind was gusting at round 30 miles an hour. Who ever was the genius that thought it was a good idea for the Bolts to play in that weather should be fired. Just saying , what do i know? Back to the game. Beers were 10  bucks a pop and as for the food it was either closed or looked like shit.

Fat guys total time at the stadium was 20 Minutes.  Yup all that work and time wasted in travel for me to stay for only one beer. AGAIN the weather sucked ass. The wind was from the north and right into our backs. A MISERABLE TIME WAS HAD BY ALL.

The only saving grace for the day was stopping by  Nathans for some chili dogs and fried clams with fries. Clams were okay…… What do you want me to say they were deep fried to the point they tasted just like the fries. The CHILI DOGS WERE ON POINT.  Fat GUY approved to say the least.

Brooklyn Bolts Home Opener  was what it was a experience.   Good bad and indifferent  all at the same time but a experience for sure.


Olla Wine Bar,  it was the site of more of my shenanigans then I would care to remember or care to admit has closed its doors for good. Olla’s brunch was notorious for its great food and 5 for 15 drink specials. I was there when the wise one. As wise as he is tall and as assholish as he is wise. He proclaimed to them the righteous path of the manmosa to Olla . The wise one declared that” if thy shall make me this drink you shall have the boozyest brunch in brooklyn”. They made this manmosa hundreds  of times if not thousands.  But alas they did not hed  the words and never added it to the menu. Now we must find a new brunch spot. Where do you recommend?

It was the last warm Sunday of the Summer of 2015. My friends wanted to hang out. It WAS a Sunday Funday after all. Weather wise it was perfect for a picnic. We grabbed a few bottles and headed to the park to enjoy the sun.  The first bottle to be opened was the Lunetta Prosecco .  It had enticing aromas of apple and peach give way to a palate that is refreshing, and harmonious, with crisp fruit flavors and a clean finish. Lunetta Prosecco is delightful as an aperitif or enjoyed with antipasti, hors d’oeuvres, sushi, shellfish and seafood.  Well worth the 12 bucks to buy it. Next was the Cupcake prosecco. Not the best move the Lunetta over powered most of the flavor.  Although you may need raise a glass of this refreshing Prosecco that sparkles with fine effervescence. Aromas of white peach, grapefruit and honeydew melon lead to flavors of creamy ripe lemon, refined citrus and a toasted brioche finish.

I should really stick to my bud light.

But hey Im not a Basic bitch.

After many months of seeing everyone post the dam cocktails with the Popsicle in  prosecco. After craving them, Wanting them, NEEDING THEM. I finally got one and it was HIGHLY OVER rated. It may have been the flavor that I selected Raspberry or the fact that I just knocked out a pitcher of white sangria. But the boozy popsicles were not that good. They were okay. Nothing to brag about or recommend. The only saving grace for this place is the view.

Three Guys from Brooklyn. Does not sound like much but its one of the best stores in Brooklyn. Large selection, helpful workers… Blah blah blah. They have a great selection of olives and other pickled products. They are  not like the pickle guy or sahadi’s but what the hell when you just need somethings  above the basics its perfect.

WE ARE NOT BASIC BITCH SAYS NO TO CANNED OLIVES.  LETS REPEAT THAT AGAIN NOT CANNED OLIVES OR EVEN JARS. Olives are supposed to be in barrels not cans. You don’t need to taste the metal or staleness.   You need that fresh, clean, crisp taste that will boost the flavor of your wine and cheese. DONE 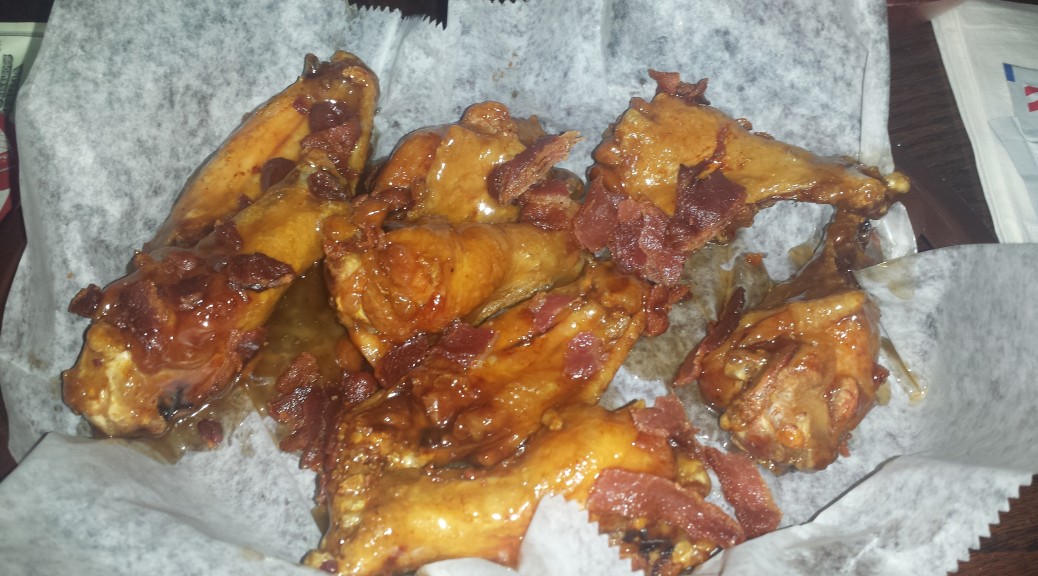 I spent most of  today getting this site trying to get this site up. Its also  Football Sunday. You Know what it means time to chow down on some Buffalo wings.  I spent WAY too long staring at the the screen drooling over food. I got to get me some wings now.  Off to the Bean Post to get some great wings.  They have everything from Dry rub to flavors that you will never see anywhere else. I personally recommend The Maple bacon wings. The sause is made with Jim Beam maple then they get sprinkled with love. BACON! These wings will comfort you when your team wins and console you when they lose.

Sometimes all you want is a Pickle and a Beer. That is all. Don’t give me that look. Don’t you get cravings? Well thats mine! Pickles and beer. Especially during the summer there is nothing better then having a nice cold beer and a pickle. Whats your craving? Comment below

The term “Peace Pipe” arose from the Native American and the idea that smoking the pipe signified peace and friendship. It is an “Honor” to be selected to hold a peace pipe. It is believed it will give the keeper great powers as long as they live an honorable life.

Peace Pipe Malbec Reserve  has an intense ruby red color. Complex and elegant nose with a delicate combination of red fruits and spices, combined with notes of vanilla and chocolate. This wine can be a great companion for well-seasoned meats.

What more do I have to tell you? ITS DAM GOOD.

Kentucky Bourbon Barrel Ale is a unique sipping beer with the distinctive nose of a well-crafted bourbon. Our Kentucky Ale® is aged for up to six weeks in freshly decanted bourbon barrels from some of Kentucky’s finest distilleries. Subtle yet familiar flavors of vanilla and oak are imparted to this special ale as it rests in the charred barrels. Pleasantly smooth and robust, Kentucky Bourbon Barrel Ale may also be served as an aperitif or after-dinner drink. Launched in 2006, it has grown to become the flagship beer of the premier name in barrel-aged beers: Alltech Lexington Brewing and Distilling Company.

Guys, The Time has come to relive your childhood. Remember those juice boxes we all loved? Well they  came out with a adult version. Black Box Wines  serving  sized Pinot Grigio   is 3 glasses per box, 2 if you are from Brooklyn.  It works what can I say about the product. It is what it is. The pricing is fair for what it is. DO  you really expect to get something amazing? No. Will is get you Buzzed Yes.