Is it just me, or are everything and everyone just so tone-deaf? Since the start of COVID, there’s been no flavor, no motivation, or urge to do things. People are starting projects businesses, but even fewer than typical are finishing them. There have been one-offs that make it big and finish what they are working on but just about it, how many of your friends and coworkers have actually finished what they said they were going to do?

I Have Zero Motivation.

Unfortunately, I can’t preach to you on how to stumble across some motivation, either. The fact is, we are all stuck in the same rut of lack of motivation. I’m just here to document and let you know that everyone has the same issue, so don’t feel like it’s just you. I have 4 current open personal projects that I can’t finish. The ideas are there, but the fire is not if that makes sense. I have all the independents to make killer burgers but can’t turn on the Grill. The day-to-day grind is still being done, posting, cooking, etc.; all the big projects are just floating in the ether, a place of limbo. Even this post took almost 2 weeks to write because I just could not get started!

The biggest thing that gets me is my sense of time;.time is going both fast and slow. The day drags on but finishes before you can get anything meaningful done. Looking back to last March, it feels like 3 years have passed, but what have you really done? Every day is just a copy of the last. We are only on a giant carousel going round and round. When it stops, nobody knows. By the time you get ready to do the work, the day is already done. A person can’t plan how to get things done that are not essential. Work stuff gets done slowly because we are all remote, and management doesn’t expect more than the minimum. Just enough not to get fired in most cases. How can you plan out your day if it is gone before you know it?

Solutions? I have none, just going to do what I always do and try to force myself to do it. Is it the best resolution? No. Will it hinder the final product because I am not motivated to do it? Yes. But I need to get the projects done and but it will not have the same flare as pre-covid  Does anyone have any tips and tricks to get yourself motivated again? If so, please leave them in the comments…

If you need help

Don’t forget that there is the covid-19 metal hotline available around the clock. Here is the link for the NY project hope.  Remember you are not alone.  There is help if you need it. 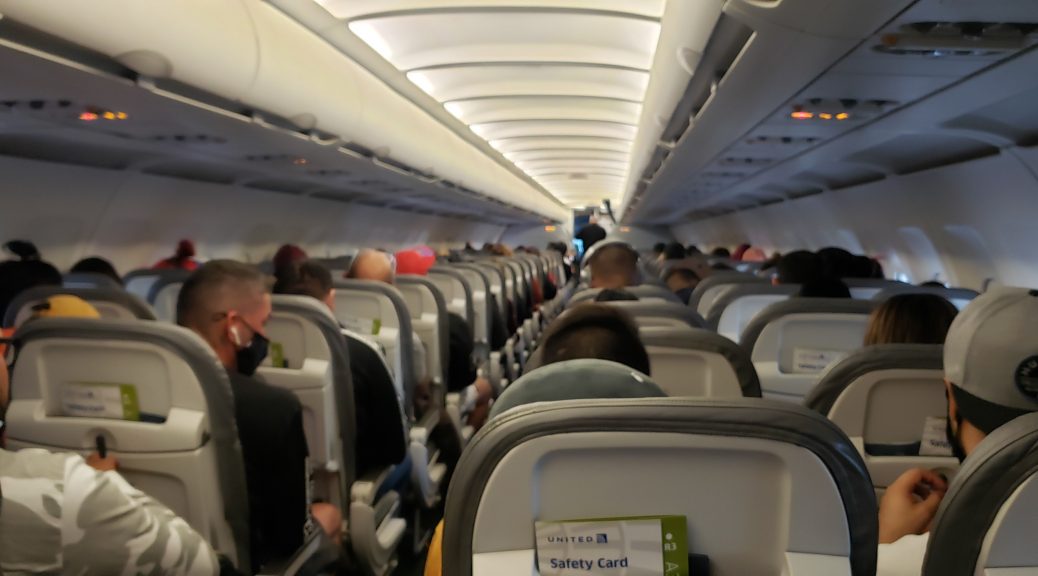 Why am I flying during a pandemic? It’s late November; the COVID-19 case numbers are spiking, and I’m flying to Fort Lauderdale. Why? I’m burnt out on going into the office every day and need some time to turn the brain off and relax. In all fairness, I was expecting a complete shit show from what the media was describing, i.e., people not wanting to wear masks and pure chaos. Topping it off, I was flying in and out of LaGuardia airport, which to New Yorkers, is the worst airport that you can leave out of to go anywhere at any time. Think Murphy’s law centralized into one location: anything that can go wrong will go wrong at Laguardia Airport! Remember the ducks that took out the airplane? YUP, you guessed it!

Getting in and out of LaGuardia Airport

The first sign that the stars were aligned in my favor was that it took only 25ish minutes to get from Sunset Park, Brooklyn, to LaGuardia Airport. No traffic, I mean none at all! ZERO! You would expect me to get into a massive line at LaGuardia airport, though, wouldn’t you? NOPE! 5 minutes to get through Terminal B. Construction was just finished on the terminal, and it looked great. Plus, no people around.

The biggest issue that I had was finding the American Express Centurion Lounge closed due to COVID. In fact, there were no open lounges at all inside of the airport. Why do I like lounges? FREE FOOD AND ALCOHOL. (One of the many benefits of having a Platinum Amex is that it is still worth it in 2020?)  COVID forced restaurants and most of the lounges to close due to restrictions, unfortunately. Airports were never designed to handle COVID, but since there are far fewer people flying than before, it’s a lot easier. I went on this flight sober for…the first time in a long time.

I am combining both the flight back and forth to Fort Lauderdale in one segment. Let me say that the staff and overall experience was great, which helps a lot with the anxiety of traveling these days. However, I was still not 100% mentally ready for people after everything that’s been going on. You won’t understand what I’m talking about until you are in a confined space with people you don’t know during a pandemic. United was on point with their boarding process as you no longer board in groups but rather in four-row sections for less congestion.

When they enter, they receive a wipe packet for their use on their seat or hands or whatever they want to sanitize. The staff and ground crew disinfect the plane after each flight, but that touch of letting us do it as well is very nice. It’s purely mental to let the passenger think that everything is cleaner because they did it themselves. As a bonus, the flight back even had pre-made snack packs.

My only issue with the flight was that there were no beverage purchases allowed. Don’t freak out, United Airlines had water and Coke products available for free, but I just needed a real drink. There was nothing on the ground or in the air to calm my nerves. There were way too many people in one place. I was not ready for it at all. Did I deal with it? Yes. Was there stress? Yes. Still, Jack Daniels and coke would have made things a lot better.

Crazy People on the flight

I don’t know if I was lucky or if the media has been blowing things out of proportion * cough* media *cough*, but everyone on my flight followed the rules, did what they were told, and were super chill. I can even say that they were nicer than normal. The only issue was a woman saying she was not told about the NYS COVID traveler Health form. The boarding crew only mentioned it 10 times and said that New State was enforcing it, but k

You could say her jaw dropped when she saw a squad of National Guard at the gate checking for the online form email. LESSON to my readers: fill out the form before you get on the plane!

Is it worth traveling?

Overall the whole process was pretty damn good. I got the break I needed and came back refreshed. Do I recommend it to everyone? Sure. But take it with a grain of salt from someone like me. I’m in construction; we had a 9% fatality rate in 2018. <link> I take on risk my whole life. This isn’t that bad use your head and think for yourself. This is just an opinion of a fat guy from Brooklyn. What do I know?

If you would like to know more about COVID, I highly recommend taking a COVID tracing Course

Today’s blog is taking a detour from our usual talk of booze, fine foods, and finance. No, today we’re talking about something a little more daunting: The Pandemic. Place yourself in mid-September 2020. COVID-19 sees an increase worldwide, and people are worried that there will be a second wave. You look online and notice that coursera.com has a FREE COVID-19 contact tracing certification from John Hopkins University. You wonder if you should take the course. God willing most of you reading this are a few years in the future, and COVID-19 is long forgotten (this still applies to you <insert a current name for crisis>).  This is a reality for the rest of us, so pay attention to what I’m about to write.

The short answer is Yes.

The short answer is yes: you should take the certification. It’s a free certification, it’s relevant, and should only take a candidate 7 hours. Why is it free? Because the country needs or needed personnel that can trace COVID contacts to limit the spread.  Bloomberg Philanthropies paid-for the course and certification shareability.

I have already taken and passed the certification. There were three reasons why I took the course, and none of them have to do with philanthropy. (ee don’t get that Bloomberg money). The first and most comforting explanation is that the course goes into reasonably good detail describing how the virus behaves, spreads, and its possible symptoms. As the Old Russian saying goes, “God protects those who protect themselves.” The second is that if shit hits the fan, I have another piece of paper that can make my resume stand out of the pile or even grant me the opportunity to work as a COVID tracer.

The final reason and most relevant in the long term is social engineering prevention: big words that small people use to make their job seem more critical. It’s to prevent scammers from stealing you and your loved one’s private information. How are you supposed to know what COVID tracers are supposed to ask if you are not one of them? How long until some scammer calls you asking for your social security number or, worse, your paren’ st? I AM SICK AND TIRED OF THE CALLS.  Let’s all learn how to spot the scammers, put them on hold on hold for an hour or two, and waste their time like there’s no tomorrow. Knowledge is power!

To summarize this whole post, get the COVID-19 contact tracing certification from John Hopkins University, there is no downside. Skipping it to drink yourself stupid is not a good reason. Get the certification and then drink…to celebrate, of course.